In Real Life: How I Cross-Trained My Way to a Career 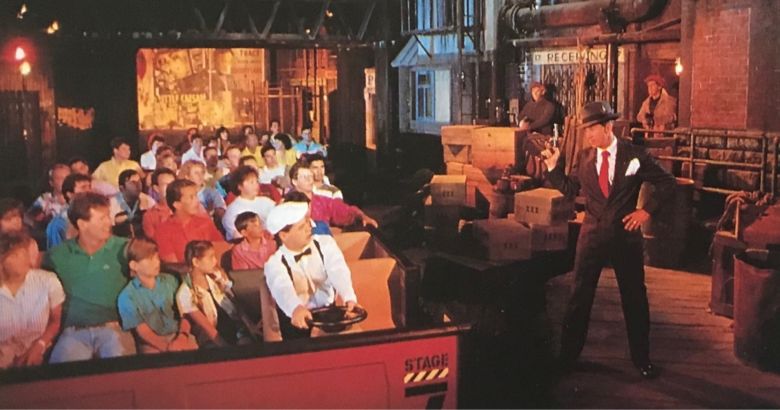 You’re reading this column because I worked at The Great Movie Ride in 2004.

Let me explain (as long as you’re in the mood for a Disney story).

Figure 1: Pretend I’m the guy in the white hat from this 1989 promotional image for The Great Movie Ride

I began my Disney career as a part-time attraction host. I was an HR and ops manager for another company and I was looking for something fun to do on the weekends. Most people would probably get a hobby. I got a second job … at Disney World! 🙂

It only took two months for me to realize I wanted to make Disney my full-time career. I was totally sold on the “magic” (which is 100 percent real, by the way). But there was a problem. I had zero tenure at a company that promotes almost exclusively from within. My upwardly-mobile peers had already been there full-time for over three years (if not 10, 20, or 30). The five years of operations management experience on my resume didn’t matter. I needed a plan. I had to find a way to show people I was ready to be a manager here, even if I was still “earning my ears ».

At that point I worked in one location: Star Tours. However, based on the structure of my area of the theme park, I was permitted to work in other locations too. These included Indiana Jones Epic Stunt Spectacular (Epic), Muppet Vision 3D (Muppets), Sounds Dangerous! and The Great Movie Ride (GMR), which remains my favorite all-time attraction. I could also be designated as a peer trainer and coordinator in each location. None of these roles required a formal promotion or transfer. They just required cross-training.

Based on my initial observations, a limited number of cast members worked in multiple locations. Many of the ones who did were clearly working towards advanced roles. Managers seemed to notice them more often because they were able to leverage their varied skills and move them into different positions to address operational needs.

So, after just three months on the job I decided to cross-train my way into a manager position at the Walt Disney World Resort. If I could become the most indispensable frontline cast member on my team, I would be an obvious choice for the next available spot … right?

I created a checklist that included every possible designation and the order in which I would attempt to acquire them on my cross-training journey. I taped this handwritten list to my refrigerator. It looked something like …

Twelve uniquely Disney positions stood between me and my goal: Guest Experience Manager.

Where should I begin? What could I do to check the boxes as quickly as possible so I could make my career transition? To my knowledge, no one had done this before and there were some rules and expectations I had to consider. For instance, cast members were required to work in a role for at least six months before training in a new position. I had only been there for three. Plus, my schedule would have to be continuously changed to accommodate three to five days of training for each position. I only worked on the weekends. If I waited for things to progress on their own, it would take more than two years to reach my goal.

I opted to launch an influencer campaign (aka strategic networking). I wasn’t interested in breaking any rules. Instead, I networked with people who could help me “overcome” these obstacles—for the right reasons. For example, I discovered that my manager’s wife was in charge of GMR training. I consistently volunteered for extra duties and extended my shifts to cover staffing gaps. After a few weeks, I mentioned my interest in working at GMR. I was on the training schedule shortly thereafter. The rule said you had to wait six months to cross-train. I checked my first box in four. This is where I learned just how important networking is for long-term career development.

Supportive influencers would help me achieve my goal faster but I still had to work hard to develop the knowledge and skills needed to exceed performance expectations in every role. I had to do my best work during every shift if I expected to get the next opportunity. I spent my breaks speaking with experienced cast members, picking up additional insights. I re-read the documentation to make sure I understood the finer details of each operation. I used every second on the clock to learn how to do my job better.

In addition to advancing my skills, I had to become more visible to management. My capability wouldn’t help me achieve my goal if managers didn’t recognize my value. I started picking up more shifts, often getting up to four or five per week. I became a consistent presence in the workplace. This also provided the scheduling flexibility needed for more cross-training. Of course, I was already managing another business full-time. That means, on average, I worked nine days (shifts) and drove 515 miles (home > job 1 > job 2 > home) every week during my cross-training effort.

I checked the first box (GMR Tour Guide) on my list in November 2004. I checked the final box (GMR Coordinator) in August 2005. In 10 months I completed 12 training programs to become the “most capable” cast member in the area. I interviewed for a manager position in October. I was added to the talent pool in December. Finally, I transitioned into a full-time manager role with Disney in early 2006.

The moral of my story is simple and familiar: the more you can do, the more opportunities you have. I believe in the value of workplace generalists. Yes, it’s important to have a few topics on which you are a near-specialist. But in real life, a wide range of skills provides you with the flexibility needed to adapt to unexpected circumstances—like a global health crisis.

My story demonstrates the importance of rapid skill development and why it must become an L&D priority. We must establish channels and mechanisms that can help people accelerate their development so they are ready to take on new roles and additional responsibilities as needed. This will require a shift in L&D focus—from traditional, place-and-time training to integrated, personalized learning and curated resources. Whether it’s reskilling, upskilling, or cross-training, L&D will play an essential role in getting the right people into the right positions to help organizations navigate ongoing disruption.

I wouldn’t be writing this column in 2020 if I hadn’t recognized the importance of cross-training in 2004. What career opportunities will you reveal for the people you support by making ongoing skill development an integral part of their work experience?

Thank you for everything you are doing to support your teams and communities during these challenging times. If there is anything I can do to help, please reach out via [email protected]