Inside the information war on Black voters 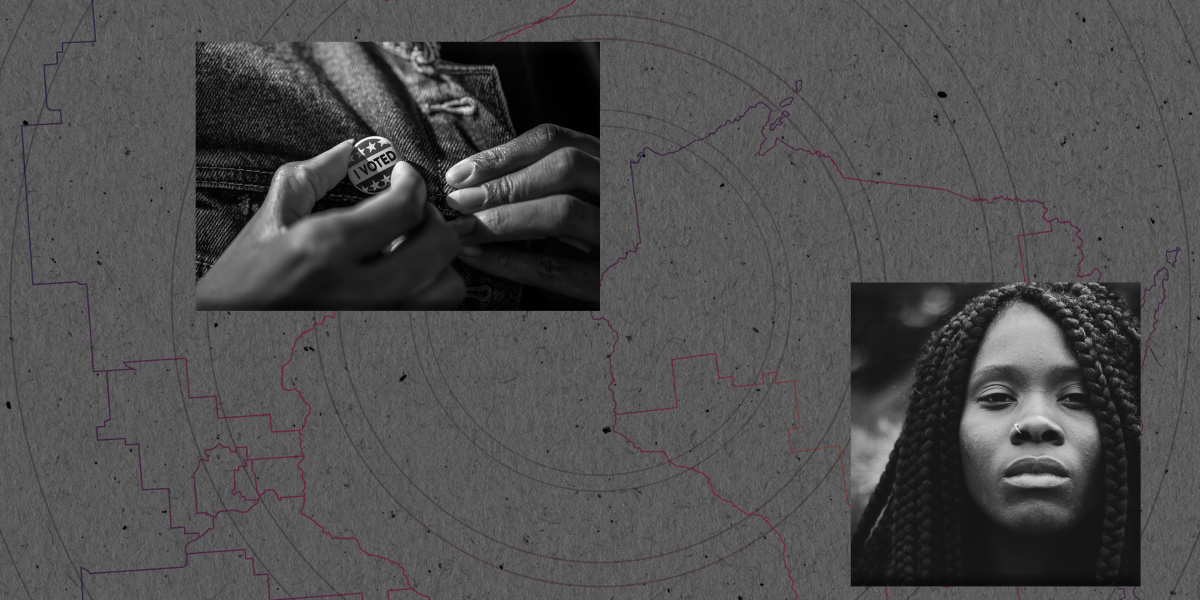 In August, about 12,000 cell phones with Detroit area code 313 got recorded messages from “Tamika Taylor.” She claimed to be a member of a civil rights organization called Project 1599, and said she was calling to warn that applying to vote by mail could lead people’s personal information to be entered into a public government database. Her tone and language led listeners to believe she was a Black woman, and she told the largely Black listeners that the database would be used to reconcile outstanding police warrants, collect credit card debt, and track people ahead of the release of a mandatory vaccine.

But Tamika Taylor was not real, and the warnings were fake too. They were part of a campaign to suppress the Black vote in swing counties across five Rust Belt states. Earlier this month, the Michigan attorney general pressed charges against the founders of Project 1599, the notorious right-wing political operatives Jack Burkman and Jacob Wohl, for voter suppression in violation of the 1965 Voting Rights Act. They pled not guilty.

Black voters in the Midwest, particularly in Rust Belt states such as Wisconsin, Minnesota, and Michigan, are crucial to the outcome of the 2020 election. And those communities are being deliberately targeted with messages of confusion, intimidation, and disinformation, all meant to dissuade them from voting.

Black Americans are typically very politically engaged and form a voting block that leans left, but turnout in this population lagged in 2016, putting previous Democratic strongholds like Minnesota up for contention. Today as in 2016, while one side is trying to mobilize the Black vote, the other side is trying to suppress it via information warfare. Such activity can be illegal under the Voting Rights Act of 1965, and some experts have called for new legislation against voter suppression in the age of the internet.

The robocall campaign in Detroit preyed on existing suspicions felt by Black voters in Michigan and throughout the country. “They were just saying things that have been said on the streets, condensed in a phone call,” says Rai Lanier, an organizer at Michigan Liberation, an activist group and superPAC focused on criminal justice reform in the greater Detroit area.

For the better part of a year, Lanier has been reaching out to the same predominantly Black neighborhoods that the callers targeted in Wayne and Oakland Counties, attempting to convince people to turn out and vote. She says many voters had seen effective disinformation messages or received robocalls aimed directly at the fears of Black Americans—especially during a time when the government’s concern for their well-being feels in doubt. Black Americans are over 2.5 times more likely than whites to contract covid-19, and twice as likely to die from it.

“It’s saying all of these insecurities that are floating around in folks’ heads, like ‘Can I trust my government to make sure that they’re not going to force a vaccine on me when we have in the Black collective memory the Tuskegee Institute experiment?’” says Lanier. “Here’s this robocall that’s saying all of this stuff out loud.”

Michigan is a political battleground in most years, but Lanier says 2020 has been particularly testing. “With the amount of misinformation that’s out there, and really just people feeling like they don’t know who to turn to, there’s not a precedent that we, as a society, are holding on to. It’s been tough,” she says.

Across Lake Michigan, Wisconsin is also a hot spot. In 2016, Black turnout dipped almost 20% from the previous election, one part of a swing that helped make Donald Trump the first Republican to win the state since Ronald Reagan. At the end of September, a report by Britain’s Channel 4 News revealed that a data set obtained from Cambridge Analytica had marked 3.5 million Black Americans in battleground states as ripe for “deterrence.” The report says Americans were sorted into eight groups that indicated how the Trump campaign should target them via social media. Over 54% of those marked with “deterrence” were people the database determined belonged to minority groups. Of Wisconsinites in the data set, 17% of those marked with “deterrence” were labeled as Black, though Black people make up only 5.4% of the state’s population.

It’s unclear whether the campaign was at all successful in deterring Black voters in Wisconsin or elsewhere in 2016, or whether this type of individual propagandizing is happening in 2020. But what is clear is the intention of the Republican campaign last time around to strategically suppress the Black vote.

Stricter voter ID laws and increased requirements for early voting were passed by the Republican-controlled state government before 2016, in what they claimed was an attempt to reduce voter fraud, but in practice lowers Black turnout. Milwaukee, Wisconsin, is one of the most important cities in the 2020 race and almost 40% Black. In the primary this spring, many Milwaukee residents say they didn’t receive their requested mail-in ballots, and a shortage of poll workers led to the closing of all but five of 180 polling locations in the city. And a challenge to a Republican-sponsored effort to purge voting rolls, an error-ridden process meant to update a voter registration database, is still before the state supreme court.

The manipulation of trust

Lanier says her most effective tool for countering this type of manipulation is trust. Michigan Liberation and TakeAction Minnesota, both part of the Win Black network, rely heavily on strategies like in-person visits, one-on-one video calls, and partnerships with local churches and community leaders. The campaigns have seen success. Kenza Hadj-Moussa, director of public affairs at TakeAction Minnesota, says that repeated door-knocking in minority communities was key to recruiting first-time voters, the winning strategy behind the election of Congresswoman Ilhan Omar.

But online, fake versions of trust-building tactics have been used to infiltrate Black digital spaces. In 2016, the Russian Internet Research Agency (IRA) used trolls misrepresenting themselves as Black, liberal Twitter users to engage with mainstream “Black Twitter” ahead of the election. A recent study from the University of North Carolina found that tweets from Black-presenting IRA accounts got far more engagement than non-Black-presenting trolls. Last week Twitter suspended a set of accounts claiming to be Black Trump supporters for violating its rules on spam and platform manipulation.

Black women, specifically, are often disproportionately targeted by disinformation. At a congressional hearing last week, Nina Jankowicz, a disinformation expert at the Wilson Center, shared an analysis her team performed during the vice presidential debate on October 7. Tracking the number of messages on the platforms Parler and 4Chan relating to sexualized disinformation or violence against Senator Kamala Harris, the Democratic candidate, they saw increases of 631% and 1,078% respectively. This kind of online abuse, Jankowicz testified, is “meant to affect American women’s and minorities’ participation in the democratic process.”

Both the Biden and Trump campaigns have implemented specific communication strategies for Black voters. Notably, the Biden campaign more often talks to Black communities, and the Trump campaign tends to talk to white voters about Black communities. Perhaps President Trump’s biggest advertising focus has been on “law and order”; through September 1, more than 60% of his ads were about crime. Though Biden has also spent advertising money to condemn looting and rioting, most of his ads through the same time period centered on the coronavirus crisis.

“Law and order” is a direct reference to the protests that rippled through the US after the murder of George Floyd by a police officer in Minnesota on May 25, the police shooting of Jacob Blake in Kenosha, Wisconsin, in August, and the subsequent fatal shooting of protesters by a white 17-year-old, Kyle Rittenhouse. Lanier says that racialized political messaging is reverberating most strongly with white people. There have been lots of calls to white people about how they “need to be ready to do what it takes to defend their families and defend their communities,” she says, “which seems frightening and a little more intense than saying, ‘Hey, can you go vote on November 3?’”

In Minnesota, the summer of protests has similarly been used in messaging predominantly to white people. Hadj-Moussa says that for Black voters, “the issues with policing and the murder of George Floyd are very independent of what’s going on in the electoral world.” But she acknowledges that the two are interrelated, and she says the events of the summer have contributed to an “edginess” that she feels on the ground.

“Making sure we can get ahead of this”

Though the Voting Rights Act protects against intimidation tactics such as armed citizens at polling places, it doesn’t specifically protect against voter deception, one of the most common tools of suppression online.

In 2006, as a US senator, Barack Obama introduced the Deceptive Practices and Voter Intimidation Prevention Act, which failed to make it into legislation. Voter deception online increased dramatically in the run-up to the 2016 election and has continued, in no small part because of President Trump’s actions. In March 2019, the House passed the “For the People Act,” which includes many of Obama’s original protections against deception, but it is yet to be passed by the Senate.

Lanier and Hadj-Moussa both say encouraging early, mail-in-voting is key to avoiding a likely onslaught of disinformation, intimidation, and suppression aimed at Black voters from now until the election. Activists remain vigilant: just before Election Day four years ago, citizens from Somali immigrant communities in the Minnesota suburbs received text messages containing disinformation about how to cast their vote. But with about 3.3 million ballots already cast in all three states, both Lanier and Hadj-Moussa are confident in Black turnout numbers.

Lanier says her confidence comes partly from the events of this summer and the lessons they have reinforced about being Black in America.

“I think we’re definitely going to turn out. We talk a lot about why Black folks are so engaged, and I think it’s because ultimately we have to be,” she says. Black political participation happens “not because it’s a cute thing to do, but literally because our survival has always depended on the rule of law.”