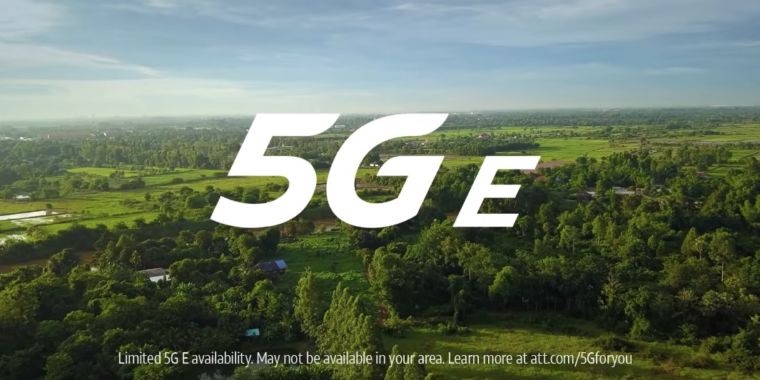 AT&T has reluctantly agreed to stop using the phrase « 5G Evolution » to describe its 4G service in advertising but will apparently continue to use the misleading « 5GE » icon as the network indicator on phone screens even when there’s no 5G service.

AT&T’s so-called 5G Evolution service is in reality just 4G with advanced LTE features like 256 QAM, 4×4 MIMO, and three-way carrier aggregation. AT&T has faced widespread ridicule since putting the 5GE network icon on 4G phones more than a year ago, but the icons have likely convinced many AT&T customers that they have 5G service when they really don’t. The other major carriers also deployed LTE-Advanced features but continued to accurately describe the service as 4G.

T-Mobile last year challenged AT&T’s 5GE campaign with the National Advertising Division (NAD), which serves as the advertising industry’s self-regulatory body, and the NAD subsequently ruled that AT&T should discontinue the 5G Evolution claims. AT&T appealed that decision, claiming that its ads « served to educate customers about the billions of dollars AT&T has invested to give customers an outstanding experience, » but the National Advertising Review Board (NARB) rejected the carrier’s appeal.

An NARB panel « recommended that AT&T discontinue its ‘5G Evolution’ and ‘5G Evolution, The First Step to 5G’ claims, » the group said in an announcement yesterday:

Agreeing with NAD’s findings and recommendations, the NARB panel determined that both claims will mislead reasonable consumers into believing that AT&T is offering a 5G network and recommended that the claims be discontinued. At NAD and on appeal, it was not disputed that the AT&T network is not a 5G network. The NARB Panel agreed with NAD’s analysis and concluded that the term « Evolution » is not likely to alert consumers to the fact that the service is not 5G. The Panel noted that the current prevalent technology in wireless is 4G LTE, and LTE stands for « evolution. » Thus, consumers may well interpret « Evolution » in the challenged claims as signifying that AT&T’s technology has already evolved into 5G.

AT&T’s claim that 5G Evolution is « The First Step to 5G » could convince reasonable consumers that AT&T is « promoting a 5G network, while promising an even more robust 5G network at a later time, especially since the slogan is being used in conjunction with ‘5G Evolution,' » the NARB said.

An AT&T spokesperson told Ars that « AT&T respectfully disagrees with the reasoning and result reached by the Panel majority. AT&T’s customers nationwide continue to benefit from dramatically superior speeds and performance that its current network provides. As a supporter of the self-regulatory process, however, AT&T will comply with the NARB’s decision. »

The AT&T spokesperson today refused to answer our questions about whether the company will keep using « 5GE » on phone screens and would not even confirm that the 5GE indicator still appears on phones today. (It does, according to AT&T’s website.) Complying with the NARB decision by pulling ads doesn’t prevent AT&T from using the 5GE network indicator. AT&T « suggested that it will continue to display ‘5GE’ icons on customers’ phones, » The Wall Street Journal wrote yesterday.

While AT&T will no longer use 5G Evolution in advertising, the company still hypes 5G Evolution on its website, saying that 5GE is « enabling faster speeds on our existing LTE network. »

« 5G Evolution is now live in over 550 markets. Many of our most popular smartphones are displaying a ‘5GE’ indicator to let you know when you’re in an area where 5G Evolution is available, » the AT&T website says.

AT&T has continued using the 5GE icon despite now offering real 5G. AT&T uses « 5G » for its 5G service on low- and mid-band spectrum, and « 5G+ » for its faster 5G service on millimeter-wave spectrum.

AT&T was on the other side of another recent 5G advertising dispute when it filed a complaint against Verizon. The NAD last week determined that Verizon’s claim to be « building the most powerful 5G experience for America » is « not supported by the evidence in the record. » The NAD also urged Verizon to more prominently disclose the fact that its 5G coverage in sports arenas is available in only parts of the arenas and that Verizon 5G « is available only in parts of select cities. »

The NAD said that Verizon agreed to « comply with NAD’s recommendations regarding the clarity and conspicuousness of disclosures, » but the carrier is filing an appeal that defends its claim to be « building the most powerful 5G experience for America. » The NAD said it « determined that in the context of the challenged advertising, » which includes visuals of fans in sports venues and some present-tense language, the Verizon claim communicates « the present-tense message that Verizon is delivering ‘the most powerful 5G network for America.' »

Verizon, however, argued that « the intent of the commercial is to inform consumers about the billions of dollars Verizon is investing in its 5G buildout » and that « consumers understand that this is the only message that is reasonably conveyed. »