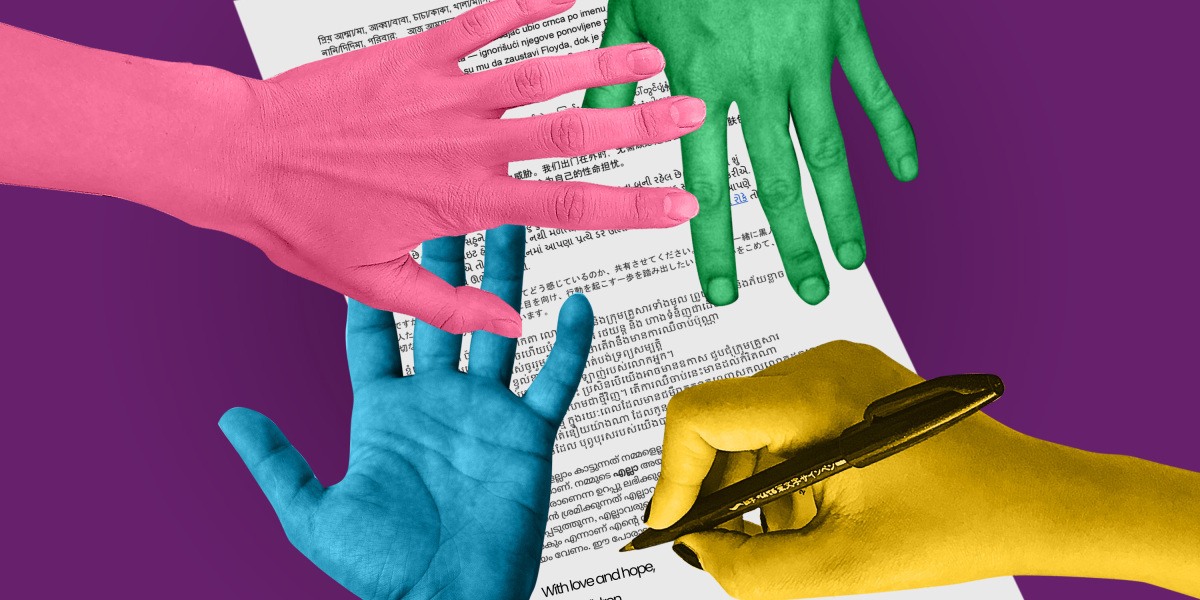 Asian-Americans have long been “triangulated” in race conversations in America, according to Claire Kim, a political scientist at the University of California, Irvine—that is, they are seen as standing outside a conversation perceived to be taking place between Black and white people.

How to be an ally

The premise of the group is disarmingly simple: using a basic letter template addressed to family members, the group translates it into various languages and dialects with the goal of sharing what antiracism and how Asian-Americans might act as allies of the Black community. As of publication, there are 31 translated letters. The group is also having letters read aloud in various languages as an audio piece to be posted on YouTube, further expanding the project’s reach to the elderly, blind, and visually impaired.

All of this has been organized through Slack, an office productivity app that has been embraced in 2020 as an organizing tool. It has been used by households to divvy up tasks, and by local groups doing grocery runs for disabled and elderly neighbors during the coronavirus pandemic.

Hong says that while Slack’s design has helped encourage conversation and organization, a lot of the coordination around translating letters is kept under tight control. For one thing, the group is private, and new members must be invited by a designated person. Even figuring out how to ask to join isn’t easy. “We have a really long Code of Conduct, and buried in that code is the Slack invite,” he says. “That’s intentional. We don’t want to hide it, but it counters user behavior that might counter our group, and also helps to avoid trolls.”

Slack isn’t the only tool being used in this way. Carrd sites, where users create simple, customizable interactive web pages, have popped up to crowdsource tools for talking about race. This one from Black Lives Matter, for example, uses clickable flashcards to translate information on resources about antiracism work into different languages.

Prinita Thevarajah’s Carrd features various South Asian translations of vocabulary that is necessary for antiracism discussions. Thevarajah, who is based in Australia, is an Eelam Tamil daughter of Sri Lankan organizers affected by the country’s civil war, and her new work is the result of years of thinking deeply about racism. She worked with her mother on the Tamil translation, and then recruited friends and other activists who reached out to her on Instagram to help translate.

At LBL, Fong, who says her fluency in Chinese is “mediocre,” describes a similarly elaborate process by which the simplified Chinese letter took shape. About 100 members of the Slack group contributed, adding sentences that are specific to the Chinese-American experience of microaggressions favoring lighter skin (South Asian versions, meanwhile, touched on caste and colorism as well, drawing connections between that behavior and American racism).

Millennial translators have reached out to their own parents for help, which has in itself become a way to connect with them about antiracism. “My mom was really helpful,” Fong says. “I’d say, ‘I’m going to read you this sentence and you tell me if this sounds okay,’ and she would help me unwind it if it sounded grammatically twisted.”

That’s how Adrienne Mahsa, who is Iranian-American, felt as well. She translated the letter into Persian with her mom “sitting on the couch right next to me” and found that the experience helped solidify points she and her siblings had made about anti-Black views over the course of decades—so much so that when an uncle expressed the opinion that people simply had to be polite to the police to get good treatment, her parents spoke up.

Mahsa is now thinking about how to package the same information for TikTok. She, along with many others I spoke to, recognize that the letter is only a first step toward talking openly about and recognizing anti-Black and other racist behavior.

Fong says she’s also recently seen this play out on WeChat, the Chinese social-media site that’s similar to Facebook. Her New Jersey–based WeChat feed is normally bland, she says— “It’s mostly alerts on sales at Macy’s.” But soon after George Floyd’s murder, she noticed conspiracy theories popping up suggesting that Floyd was a prop left-wing activists were using to undermine the police and the government. She says her experience with Letters for Black Lives compelled her to act, jumping into WeChat threads to talk about racism. Others have done the same.

The stories function on Instagram and WeChat has also been a powerful way to reach out to immigrants about racism. “Instagram helps us disseminate to community members, and they can reply to us,” says Garima Raheja, a volunteer with South Asians for Black Lives, a community group based in the San Francisco Bay Area. “Our group learns things from the comments, and we understand the complicated histories of events when people offer insights.”

Raheja says one of those insights has been a need for graphics that are shareable in WhatsApp and Facebook group messages. “We want to make sure the graphics are bite-size and easy to understand, which means not using academic jargon or big words that can alienate people,” she says. She adds that one huge benefit has been the ability to reach a broader audience across time zones. Zoom calls have become increasingly important too.

But the work is far from done for many Asian-Americans. Emily Lai, who works with the advocacy group Asian Accountability for Black Lives and is an LBL participant, often uses memes to discuss and educate about race. She admits it’s a work in progress. “My family still uses white, blond emojis,” she says. “I’m an ocean away from my family, and I know technology is not an end in and of itself. We need to learn what conversations can be had online and what conversations need to be done in person.”

Raheja agrees. “Our goal is to have these conversations in person,” she says.