A team of engineers at Tufts University has developed a series of 3D printed metamaterials with unique microwave or optical properties. In one case, they drew inspiration from the compound eye of a moth to create a hemispherical device that can absorb electromagnetic signals from any direction at selected wavelengths. The research was published today in the journal Microsystems & Nanoengineering, published by Springer Nature.

Metamaterials, introduced by Victor Veselago in 1968, are artificially engineered materials, which can be designed to show unique electromagnetic properties sometimes not found in nature. Metamaterials extend the capabilities of conventional materials in devices by making use of geometric features arranged in repeating patterns at scales smaller than the wavelengths of energy being detected or influenced. New developments in 3D printing technology are making it possible to create many more shapes and patterns of metamaterials, and at ever smaller scales.

Researchers at the Nano Lab at Tufts propose a hybrid fabrication approach using 3D printing, metal coating and etching to create metamaterials with complex geometries and novel functionalities for wavelengths in the microwave range.

For example, they created an array of tiny mushroom shaped structures, each holding a small patterned metal resonator at the top of a stalk. This particular arrangement permits microwaves of specific frequencies to be absorbed, depending on the chosen geometry of the « mushrooms » and their spacing. Use of such metamaterials could be valuable in applications such as sensors in medical diagnosis and as antennas in telecommunications or detectors in imaging applications.

Other devices developed by the researchers include parabolic reflectors that selectively absorb and transmit certain frequencies. Such concepts could simplify optical devices by combining the functions of reflection and filtering into one unit. « The ability to consolidate functions using metamaterials could be incredibly useful, » said Sameer Sonkusale, professor of electrical and computer engineering at Tufts University’s School of Engineering who heads the Nano Lab at Tufts and is corresponding author of the study. « It’s possible that we could use these materials to reduce the size of spectrometers and other optical measuring devices so they can be designed for portable field study. »

Another contribution is the ability to fuse multiple electromagnetic functions into a single metamaterial embedded geometrical optics or MEGO device. Other shapes, sizes, and orientations of patterned 3D printing can be conceived to create MEGOs that absorb, enhance, reflect or bend waves in ways that would be difficult to achieve with conventional fabrication methods.

Researchers currently utilize stereolithography 3D printing technologies, which focuses light to polymerize photo-curable resins into the desired shapes. Other 3D printing techniques, such as two photon polymerization, can provide printing resolution down to 200 nanometers, which enables the fabrication of even finer metamaterials that can detect and manipulate electromagnetic signals of even smaller wavelengths, potentially including visible light.

« The full potential of 3D printing for MEGOs has not yet been realized, » said Aydin Sadeqi, graduate student in Sankusale’s lab at Tufts University School of Engineering and lead author of the study. « There is much more we can do with the current technology, and a vast potential as 3D printing inevitably evolves. » 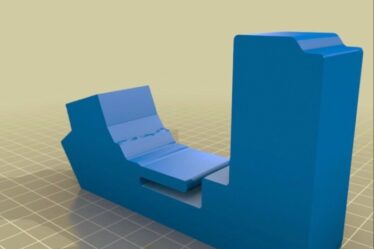